You gotta love Chicago! This past weekend I had the chance to attend amazing live music and dance performances. My weekend started with a Tango lesson and a  milonga (a tango dance party) at ArTango. Lucky for me, I just happened to attend the milonga where they had a live performance by legendary instructors Oliver Kolker and Silvina Valz. Their elegant interpretation of tango can be appreciated in this video:

On Saturday, I participated in an Afro-Peruvian performance with Peruvian Folk Dance Center at Loyola University. If you ever feel curious about Peruvian folk dances,  this is the  group to contact in Chicago. Peru is a multicultural country, and as such, its music and dances has influences from different cultures. Right now we are working on Afro-Peruvian dances, so we performed a Festejo, which is one of the most joyous of Afro-Peruvian music styles.  I couldn’t take a video of me dancing but here is pic of our group. Can you guess which one is me? 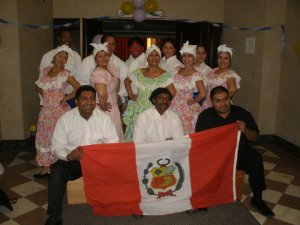 During that same event, I had the opportunity to dance to the music of a fabulous local salsa band called Carpacho y su Super Combo. They played songs that I classify as “salsa dura” style. Here is a little video of their music.I’m sorry  I couldn’t I record more of them but I had to leave the camera and start dancing!

That same night I was invited by my musician friend Ryan Mayer from Magic Carpet to attend a concert of his band with super talented Ethiopian singer Abonesh Adinew. It was truly a magical night. Her powerful and intriguing voice took me to a trip in time and space. Abonesh told me that she grew up in the rural side of  Ethiopia and that when she was little, she learned to sing by going to the cliffs and listening to the echo of her voice. How amazing is that! Later, she was chosen by her school to participate in a singing competition. She obviously won the competition, and her singing career hasn’t stopped since then. Abonesh can sing in over a dozen of the 80 plus languages of Ethiopia. She has appeared on film about the life style and culture of rural Ethiopia although her music and song are contemporary and based upon the works of many of the best known stars of Ethiopian music. Here is a video of her performance at Ras Dashen restaurant. The place was dark so you cannot see much of her, but this will allow you to appreciate the quality of her voice.

My weekend ended to the rhythms of Brazilian music by an impromptu performance at a house party of two wonderful Chicago-based musicians: Luciano Antonio and Luiz Ewerling. We are so lucky to have them here!  Watch this dynamic duo in action here:

As you can see, Chicago is truly a cosmopolitan city. Take advantage of it and travel around the world without leaving the city.

It is Saturday, and you may be thinking about a good plan to enjoy this fabulous Supermoon evening. If you need ideas, let me suggest a couple of things that you probably have never done. How about going to an event that celebrates the Spring Equinox, the full moon, and the largest moon of 2011 with cool music and healing workshops? If you are curious, then come and recharge your soul, mind, and body with the first ever Healing Arts Festival tonight at MultiKulti in the Wicker Park neighborhood (1000 N Milwaukee). There will be  healing workshops from 6 to 9 pm and later that night, you get the chance to hear the newest band to hit Chicago with their Rumba Reggae Fusion: Nu Bambu.  For more information about this event, click here.

If you rather do something around good food, dance performances, help a good cause, and go to bed early,  then come to a Peruvian-Mexican fundraising event (also in Wicker Park) that a Loyola student is organizing to raise funds to go back to school. It runs from 6 to 10pm. The ticket costs $15 and includes a Mexican-Peruvian 4 course menu and Peruvian Folk dance, music and Breakdance performances. The group I belong to, Peruvian Folk Dance center, will be performing at 8:30 pm. For more information about this event, click here or call 773.673.7292

Have a wonderful Saturday!

This is one of the reasons why I love Chicago: The diversity of options for the evening. I wish I could clone myself and go to all of them. Here are my three picks for tonight:

First option:Chicago Flamenco Fusion group EL PAYO is celebrating the release of their new CD at Martyr (3855 N Lincoln Ave). Their  fusion represents the integration of the Flamenco rhythms of Spain with the Urban sounds of Chicago. The show will feature local Latin ska band Los Vicios de Papa, and representatives of Sonorama, a Chicago based DJ collective devoted to the best and most danceable in world music. Tickets cost $10 in advance. Buy them here.

Second option: If you want to explore Indian music,  go to the party organized by  Bhangratheque. The theme of their party is “HOLI – Celebrating India’s Festival of Colors”. This is undoubtedly the most fun-filled and boisterous of Indian festivals. It’s an occasion that brings in unadulterated joy and mirth, fun and play, music and dance, and of course a lot of bright colors! The party is at Rednofive Nightclub (440 N Halsted Street). Music by DJ Jimmy Singh & DJ Krush. There will also be Bhangra dance lessons by Ajanta at 9.30pm. Bollywood Groove will raffle free gift certificates to its exciting dance and fitness classes. Tickets cost $5 before 11pm (with RSVP) and $10 after 11pm.RSVP at www.bhangratheque.com

If you decide to go to any of these events, I would love to hear about your experience and see your pictures or videos. You can submit them to chicagourbanite@hotmail.com and if you want, we can have them published here.  Have fun exploring Chicago tonight!

Tonight is the first presentation of the newest band to enter the Chicago world’s music scene: Nu Bambu. This is a bilingual, street-smart  band that has cutting-edge lyrics with a twist that fuse together different styles such as rumba and reggae. The sounds of Nu Bambu are as diverse as our cross-cultural musicians, who come from Jamaica, France, Venezuela, Colombia, Peru, Puerto Rico, Cuba and the United States. Strong Latin and Reggae flavors, pitch-bending trumpet and potent bass and drum lines give the songs a unique progressive flavor along with conscious-raising, bilingual thought- provoking lyrics that morphs into hip cutting-edge music for a new generation. This musical fusion is very contagious and rhythmic, so be ready to dance when listening to our songs.

Get a taste of our music by clicking on this link, and come see us perform live tonight at Silvie’s Lounge in the Ravenswood neighborhood at 10 p.m.

We will also be performing this Saturday March 19  at 10 pm at the Healing Arts Festival and Supermoon Reggae Party at Multi Kulti (1000 N Milwaukee)  in Wicker Park. Hope to see you all there.

Swing Brasileiro and the Passistas Samba Dance group brought the house down during the Brazilian Carnival 2011 Celebration in Chicago at Mayne Stage. Here is a sample of what happened last Saturday night.

Last year, I had the fortune to be in Rio de Janeiro for carnival. This is one of the biggest celebrations in the world and something you should experience at least once in your life. The entire city stops its regular activities and parties for days. I took this picture at the Sambodromo during  the wee hours of the night.  As you can see, the place was packed and the people were exhilarating, dancing and singing non-stop. To me, carnival is the ultimate expression of what it is to be Brazilian. This year,  I cannot be in Rio,  but  since I am in beautiful Chicago, I have the chance to party Brazilian style with the local musicians and dancers. I am planning on attending this fabulous Carnival celebration. Don’t miss it! It promises to be the best party in town.

*** Swing Brasileiro will be playing the best of Brazilian Carnival. A lot of Marchinhas, Sambas, Batucada and more ****

Welcome! This blog is dedicated to those interested in exploring a different side of Chicago, one that is culturally diverse, cosmopolitan, global. This city is home to a very diverse group of world musicians and dancers. I want to showcase their talent here and to inspire you to participate in the local world music and dance scene.  You will feel there is no need to leave Chicago to travel around the world.