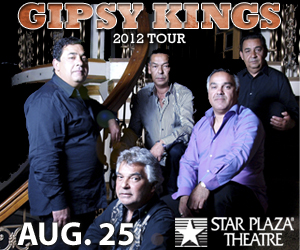 The best-selling French band in history, the Gipsy Kings, are among the best-known non-English speaking groups in the U.S. (the band’s language is the Gypsy dialect of gitane). Since the 1987 release of the international hit single “Bamboleo,” the Gipsy Kings have sold more than 20 million albums worldwide—more than four million in the United States alone. The band’s vigorous guitar work and passionate vocals are the trademarks of an indigenous musical tradition known as “rumba flamenca.” Albums such as the gold-certified Mosaique, Allegria, Este Mundo, Gipsy Kings Live, Love & Liberté, Tierra Gitana, Cantos de Amor, and Volare! The Very Best of the Gipsy Kings have provided a steady stream of hits to Billboard’s world music, Latin, and pop charts. The ensemble’s music has been used in numerous motion pictures, including Peter Weir’s “Fearless” and Joel and Ethan Coen’s “The Big Lebowski.”

WIN A PAIR OF TICKETS TO THIS CONCERT!

All you have to do is to leave a comment with your favorite Gipsy Kings song on this post. We will pick a winner from that list.

26 Replies to “Get Free Tickets to Gipsy Kings Concert!”