Chicago is more than Halloween in October. Here are some fun things to do this month that go beyond the “boo” in Halloween.

This annual favorite attracts over 40,000 runners and thousands of cheering spectators. The marathon goes through some of the city’s most popular and historic neighborhoods. The Chicago Marathon has become a world-class marathon attracting the world’s top runners. Course distance is 26.2 miles with one of the world’s flattest surfaces and unpredictable October weather condition. Click here for more information about this event.

OktoberFest is big in Chicago, and as such, there are many places loaded with goodies for the occasion. Need some suggestions on where to get your German on? TimeOut Chicago magazine recommends seven spots in the city to get an Oktoberfest pint. Get the scoop here.

Journey through the past with Ballet Folklórico de México, performing within the dance traditions of Mexico for 60 years. Credited as the Cultural Representative of Mexico to the world, Ballet Folklórico offers a lively performance that is full of movement, rhythm and technical perfection. Buy your tickets here.

Fashion Focus Chicago 2012 returns for its eighth year October 15-21. The week-long celebration of Chicago’s thriving fashion industry showcases some of its top designers and features runway shows in Millennium Park and fashion events at various locations around the city. This includes a variety of free and affordable industry happenings, shopping and designer events. Find more information about this event here.

You should also come  see “Fashion and The Field Museum Collection: Maria Pinto at the Field Museum”. The museum gave the Chicago-based designer—whom locals know as a go-to outfitter for fashion-forward professional women, but whom the rest of the world knows as one of the First Lady’s preferred dressmakers—free reign to select pieces from its vast collection of artifacts. From there, Pinto wove loose stories about how the garments relate to present-day fashion, using a few of her own designs as examples. It runs from September 14, 2012 to June 16, 2013.  More information at http://mariapinto.fieldmuseum.org/ 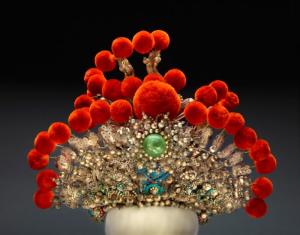 Jovanotti in Concert in at Vic Theater in Chicago

Hubbard Street’s 35th Season will kick off October 18th with the world premiere of One Thousand Pieces. Choreographed by Hubbard Street’s Resident Choreographer, Alejandro Cerrudo, this full-length piece features the music of Philip Glass and is inspired by Marc Chagall’s America Windows on display at the Art Institute. The piece is dedicated to Mayor Rahm Emanuel. More information at hubbardstreetdance.com

The Chicago Architecture Foundation’s Open House Chicago is a free public event that offers behind-the-scenes access to over 150 buildings across Chicago.

No reservations are required and everyone is welcome. Explore the hidden gems and architectural treasures of Chicago’s diverse neighborhoods — all for free.

Nearly 200 stunning treasures spanning 250 years bear witness to a period of dramatic change in India. Beginning in the early-1700s as the power of the Moghul Empire waned, the exhibition traces the shift in political control to strong regional powers, colonization by Great Britain, and the emergence of the modern, independent nation in 1947.

Through stunning objects—including beautiful paintings and costumes, fabulous jewelry and weapons, and a golden throne—the exhibition explores the concept of kingship in India, and illuminates the world of the maharajas and their extraordinarily rich culture.  These are the objects they used, commissioned, collected, and loved and through which they realized their multifaceted—and often, conflicting—role as military and political ruler, religious leader, and cultural patron. More information at http://FIELDMUSEUM.ORG/happening/exhibits/maharaja-splendor-indias-royal-courts

This annual film festival is the longest-running competitive film festival in North America. Cinema/Chicago, the presenting organization of the Chicago International Film Festival, is a year-round cultural and educational non-profit organization dedicated to fostering better communication among people of diverse cultures through the art of film and the moving image.  Their goal is to serve Chicago’s diverse and under-served citizenry by providing access to world-class cinema and to enrich Chicago’s cultural environment by presenting film in contexts that encourage discussion and debate. More information at http://www.chicagofilmfestival.com/