I have two tickets to give away to the CumbiaSazo dance party happening this Saturday May 31st! If you don’t know what CumbiaSazo or cumbia is, keep reading. David Itzi Nallah from CumbiaSazo explains it all. This party seems to be ideal for global urban explorers!
To enter for a chance to win a pair of complimentary tickets, leave a comment below. The winner will be selected randomly and notified via email on May 30, 2014.

CumbiaSazo is a DIO (do-it-ourselves) party that brings together various DJs, bands, and visual artists for a night of dancing & surprises. Only happening a few times a year and usually in different locations, the theme is broadly that of being future-rooted, or of looking back while looking forward, and I think offers something unique for a generation of partygoers who want to honor their immigrant roots while forging some kind of new identity in progress. Musically, the party represents a newer Chicago local/global flavor that digresses from the old term of ‘world music’ and instead embraces an almost rave-spirited mixing and mashing of global rhythms that’s fit for a club. Additionally, we try to fundraise for local organizations doing good work and so it’s a whole melting pot of communities joining in to create a vibe. Diverse art for diverse people is something we think is hard to find in a party space (especially in a mainstream club environment), so the party is something our collective experiments with by adding in whatever elements people think would be fun- music, bands, art, decor, puppets, piñatas, food, etc.

Cumbia is a music genre and family of rhythms popular throughout Latin America that originated in Colombia & Panama during 17th century slavery as a courtship/communicative dance and was born of a cultural mix of black and indigenous backgrounds. Still a peoples music and not quite mainstream, the rhythm has the syncopated feel of a heartbeat, which makes for great bodily dancing, and could be considered a backbone rhythm of Latin America while still being wholly connected to the tree trunk that is African sound from which all other music genres come. While the traditional instruments and influences have morphed and melded across the American continents over time, what’s intriguing to us is that today’s young people of Colombia and connected countries worldwide are re-mixing and re-intepreting cumbia as a way of breathing life into their cultural heritage while having some fun.

Why should we go see your show this May 31st?

Because we work so hard to put it together! Hehe. No really, I would say if you’re curious about new music, enjoy shaking your hips on a dance floor rather than pumping your fists, or consider yourself a ‘global citizen’ in any way, this party’s probably for you.

Why did you choose Thalia Hall in Pilsen for this party?

It was a difficult decision actually. After being underground the past years and even throwing a large warehouse party in Pilsen with it last year, we decided to go above-ground and find legit venues this season. On the one hand at 1200 capacity, Thalia Hall is a space in the city that could accommodate the rising popularity of the party where there are so few affordable options. It’s also in our dear Pilsen neighborhood where many of our organizers live and play, so it’s home and makes sense. However, with its re-opening in the context of a rapidly gentrifying neighborhood I think everyone is wondering what is going to come out of its re-introduction on 18th street. Undoubtedly, the space is mysterious and beautiful and will bring in some internationally-renowned talent to Pilsen’s doorsteps, which can be good, but no one knows what it will look like exactly. Rather than shy from that unknown and bring our beloved party to north-side neighborhoods where the big venues live, we wanted the challenge of introducing people to Thalia Hall for the first time and thought that having this many people, mostly from the area, under this roof, would forge a feeling that hasn’t been felt here in a while. That’s the intention at least and we’re excited to find out what that feeling will be.

The whole music line up and bios are here 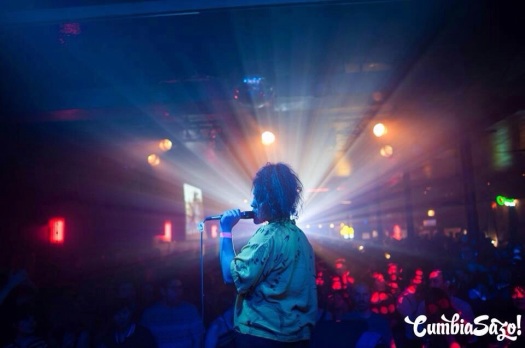 22 Replies to “Win Tickets to CumbiaSazo Party this May 31st”