“I think dancing is one of the best things anyone can do for themselves. And it doesn’t cost anything,” Frankie Knuckles.

Honestly, I have heard of House music before and paid an occasional visit to Smart Bar, but never really connect with it…until a couple of days ago, when I attended this epic dance party that the city of Chicago threw to celebrate the life of the Godfather of House music, Frankie Knuckles, who recently passed away. Chicago got together, danced and partied in peace. People from all ages and walks of life were present and created a happy, captivating energy! Check a little bit of the party’s awesomeness in this video:

This type of events make me love this beautiful city even more (yes, I love you Chicago – can you tell by all the bragging I do about you?), AND they also awaken my curiosity. So, I talked to David Chavez from Sound Culture, to get some answers about the House music culture in Chicago. He is also a Music Program Coordinator for the Department of Cultural Affairs and Special Events of the City of Chicago and was one of the brains behind this historic tribute. Here he is sharing his perspective about the House music phenomenon:

What is House music to you?
From a sociological perspective, House music to me is the product of a cultural and socio-economic time in the city, reflective of what was going on in Chicago during the 70’s and early 80’s. An alternative to the stranglehold of a segregated city, the height of 1970’s white flight and economic decay, and the backlash of black popular dance music, Disco.

From a human experience perspective, it was and still is Church for a lot of people, whatever that means to you. A safe space of acceptance to come as you are and celebrate life together without regard to race, class, or sexual orientation. It’s a release of energy and a spiritual recharge all at once. It’s a community that became a culture.

Off the top of my head I can’t really explain it another way, and any Chicago House head would agree, and expand on what I’m trying to say here.

What is the significance of House Music in Chicago?
House Music was born and developed here in Chicago and revolutionized electronic dance music globally. It’s part of our Chicago musical heritage next to Jazz, Blues, and Gospel.

Who was Frankie Knuckles and why did the City of Chicago host a dance party in his honor?
Frankie Knuckles was a DJ and producer who, in the mid to late 70’s, developed the sound that we call House Music today. His continued innovations and influence on DJ’s and producers around the world cemented the House sound. He is the “Godfather of House” and an ambassador for our city.

What places would you recommend visiting to immerse in the House music culture in Chicago?
Go to Gramophone Records, pick up 5 Magazine and read about the scene and various daily club events happening, attend the Chosen Few Picnic 4th of July weekend, and listen to mixes on deephousepage.com.

I hope the City of Chicago realizes that there is a need to have an event celebrating House music every year. After all, as David Chavez said, it is part of our musical heritage, and it is a global musical phenomenon that originated in Chicago. Events such as the dance party tribute to Frankie Knuckles – being held in public spaces at no charge – encourage integration and help promote the city as a global cultural destination. Kudos Chicago, you scored big with this one! 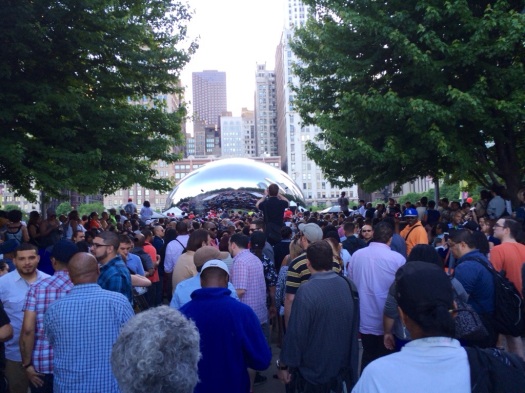